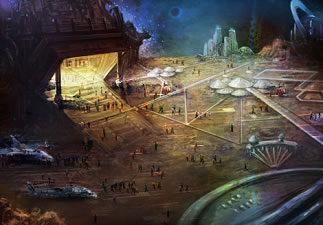 This summer sees the arrival of a new PvP war strategy web game, Star Supremacy. Set in a vast universe of epic battles and revolutionary technology, Star Supremacy is a game providing players with intense action and extensive expansion. Of course, before experiencing the full enjoyment of battle, players must set themselves a solid foundation to build from. Constant development and expansion is necessary, and it is funding from the economy that makes this possible.

At the beginning of the game, players will find resources are scarce, and development must be carefully planned to avoid economic crisis. Once a player can build up a fleet, they gain another source of income; through raiding and occupation. There are countless rich resources located on the hundreds of huge planets throughout the galaxy. By constructing a spaceport on their colony, players can directly occupy these rich resource locations and set up a trade route. Trade routes allow a colony to receive resources without the player needing to do anything apart from keep their fleet alive. If players don’t have enough troops to capture every type of resource location, they can directly exchange any spare resources or credits through their faction trade platform with other players.

After collecting or connecting up with resources locations, player colonies will develop rapidly. While getting a strong economy, players will need to pay their attention to the vast universe and how to exploit it. With the support of resources and the economy, players can have a great number of outstanding leaders commanding powerful fleets in a very short period of time. It is this strength that is required to expand further into the universe and construct new colonies.

With the first colony’s support, the development of a new colony is not as difficult as earlier in the game. Raiding and occupation is still important, however exchanging resources between your colonies enables players to distribute supplies easier, meaning fleet construction and research rates can increase rapidly. This route is located in the spaceport. The second colony is a huge leap for players’ development, allowing higher resource incomes and faster development.

Star Supremacy’s progression doesn’t just rely on finding resources on abandoned planets however. Military action to other players’ colonies can also be an important method to increase a player’s economic strength and damage their enemies. By assaulting other players’ colonies, their trade routes and resources can be disrupted. Big fleets can even destroy buildings. However, it is wise for attackers to have powerful allies before raining down destruction as they should expect swift retribution!

Generally speaking, the resources gained through the methods above lay the foundation for further development. All aspects of the economy can be further boosted through research, colony development, colonial expansion and even training up leaders. With so many options available, and with the continuous battle for resources, every player will find their own way in the universe and develop perfect strategies for their empire.

“Star Supremacy” is set in a huge universe, and its features cannot be explained clearly in just a few words. But because at its core the game is so flexible, every player will find the system that works for them.